After 27 years importing wine, HPS President Dan Kravitz took the plunge and purchased 13.5 acres of vineyard land in Roussillon. Named Cabirau after the vineyard’s original designation, the domaine lies on a hill below the famed Cathar fortress of Queribus. Planted to Grenache, it includes a prized 3.5 acre parcel of 60 year-old vines. Named “SERGE & MARIE” after vigneron Serge Soulatge (who tends to Dan’s vines) and winemaker Marie Verges of the VTV cooperative (of which Dan is now a full-fledged member!) Tasting Notes: The softness of Grenache is balanced by the mineral backbone extracted from the schistous soils. The Syrah and Carignan add pronounced spicy and peppery components. Intense yet subtle… Serve With: Enjoy with the richest and most intricate of meals.

From 1980-2007, importer Dan Kravitz sold OPW (other people’s wine). In ’07 he took the plunge and bought 13.5 acres of Grenache vineyards in Roussillon, the French part of Catalonia. The vineyard is 20 miles inland from the Mediterranean and 20 miles north of Spain. Ten acres were 20 years old, the rest 60. The name “Cabirau” has been on the plat map for 100 years. The vines were planted on steep slopes of schist, dark sharp rock that gives a distinctive mineral character to Grenache, different from the earthiness of Cotes du Rhone planted on flat vineyards of smooth white river stones.
Fast forward to 2018. There are now 23 acres (15.2 Grenache, 1.5 Syrah, 3.6 Carignan,
2.4 Macabeu) in the village of Maury, previously known for dessert wines. There have always been two bottlings. As the increasingly prestigious Roussillon Appellation requires at least 3 varietals, the first bottlings were IGP Grenache. Today the basic bottling is Roussillon, a blend of 70% Grenache, with Syrah and Carignan. The flagship bottling uses the new Appellation “Maury Sec”. Based on old vine Grenache, it also incorporates Syrah and Carignan.
In 2008 Dan became the first American member of La Tautavelloise, a progressive Cooperative in a village adjoining Maury. The next year the two Cooperatives of Tautavel merged with one in Vingrau to form VTV (Les Vignerons de Tautavel Vingrau). Dan’s Cabirau has become the ambassador for the quality-obsessed team at VTV, with sales throughout Europe as well as the U.S., and soon (knock on wood) Asia.
Dan maintains a library of all of the wines produced from Cabirau (it’s time to drink up the basic ’07), and small quantities of the older bottlings remain available. Dan is happy that the wines have been well received both by the market and the press and that he is achieving his goal of a sustainable vineyard in one of France’s best and best value Appellations. 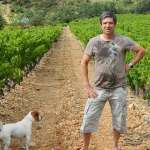