Château Pegau is a family owned Châteauneuf-du-Pape label, owned and managed by the iconic winemaker, Laurence Féraud. The château is located in exceptional terroir, situated less than 4 miles southeast of Châteauneuf-du-Pape. Named “Lône” after the small stream that runs next to the 100+ acre estate and is an offshoot of the Rhône River.

Tasting Notes: Offers aromas of acacia, nectarines and pears on the nose, with a touch of exotic fruit. Bright and well-balanced on the palate, with a long finish.

Serve With: Enjoy as an aperitif or with a wide range of fish and shellfish.

The brief history of Chateau Pegau begins with the long history of Domaine Pegau. There have been Ferauds (of French and Italian origin) growing vines in Chateauneuf-du-Pape since 1670.
Paul was one of four children. Feeling that was too many he decided to have one child, and hit the jackpot with brilliant daughter Laurence. Paul spent the first half of his career cultivating his 17 acres of Chateauneuf-du-Pape. 90% of the production was sold in bulk to top Negociants; the remaining 10% was bottled as Cuvee Reservee, thus the origin of the name for the basic Chateauneuf.
In 1987 Laurence joined her father and created the Domaine du Pegau. Born to grow wine, she took courses in both viticulture and the beverage alcohol business. She sold wine in Paris, but wanted to come home. Excellent at both winegrowing and business, it took her but five years to build bottle sales from 10 to 100% of production! Since then, her purchases have expanded the vineyards in Chateauneuf to 42+ acres.
Laurence does not have a single arrogant or snobbish molecule in her body, but she is restless and ambitious. In 2012 a large property called Domaine de la Jouve came up for sale. Four miles from Pegau, it is on the banks of the Rhone in the town of Sorgues. It consists of 148 acres and a large rundown Chateau of 10,000 square feet. The ~101 acres of vineyards include 62 of Cotes du Rhone Villages and 12 of Cotes du Rhone, with the balance Vin de Table. Laurence bought it and rechristened it Chateau Pegau. For the first vintage, she and Paul learning their way, they declassified most of the Villages to Cotes du Rhone. The red Cotes du Rhone carries the name Chateau Pegau Cuvée Maclura. The Cotes du Rhone Villages (15% of the production) is Chateau Pegau Cuvée Setier. These are complemented by a white Cotes du Rhone, Chateau Pegau Cuvée Lône. The wines are emphatically not Chateauneuf-du-Pape, nor are they priced that way. However yields have been kept to the absurdly low limits permitted in Chateauneuf, and the wines have all of the density of that great Appellation. 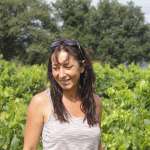